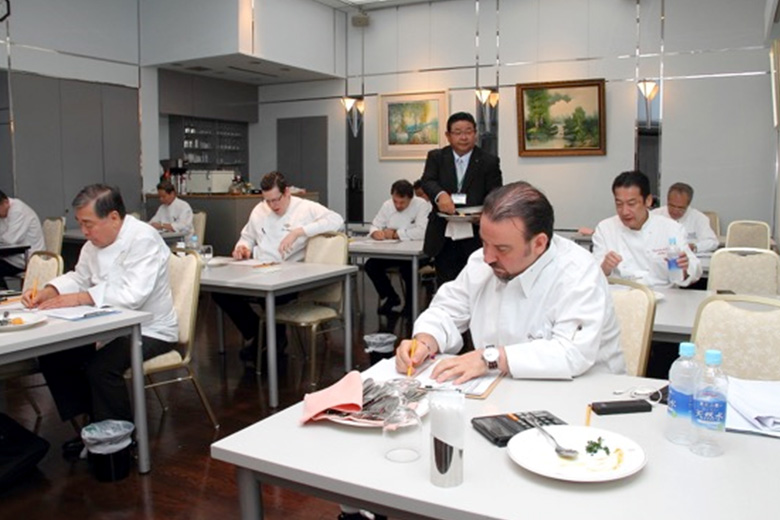 In the 1st volume, I told you about the origin, the history and the outline of the 「Le TAITTINGER Culinaire International 」which is open for young French cooking chefs and is a competition undertaken with zeal and enthusiasm.
In the middle and the last volume, I’ll report about the contest in Japan this year.
The contest this year was held at the Tokyo ChoriSeika Vocational College in Shinjuku Tokyo. 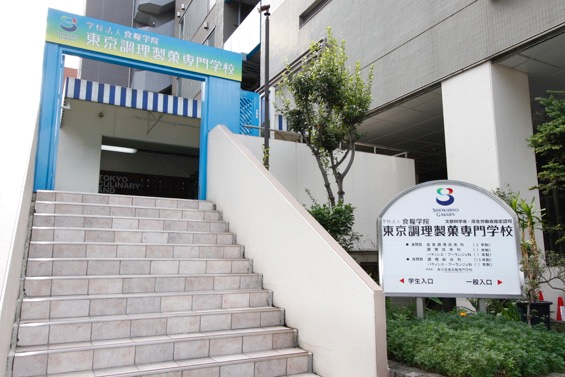 The biggest characteristic of Le TAITTINGER Culinaire International is the strict judging of the contest.
The contestants have to cut off any communication outside of the venue using mobile phones after  entering the venue until the end of the contest.
No one is allowed to enter the kitchen, except the 8 contestants, staff and a judge who is in charge of the kitchen.

One of the sticking points of Le TAITTINGER Culinaire International is that the kitchen and the room for judges are arranged separately.
The reason for this is keeping any fairness of judgement when they judge, by not letting them know who cooked the food.
At the venue this year, the kitchen and the room for the judges were arranged on different floors. The rooms were not near each other so as not to hear the sound from the judges and the contestants and they wouldn’t have any contact with each other.
Neither contestants nor judges are allowed to go out of the venue until the 8 contestants’ foods have been served. 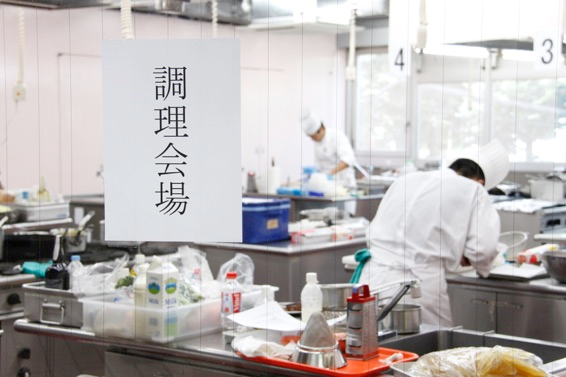 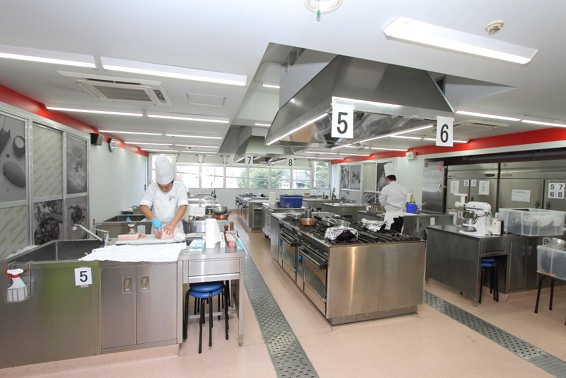 In the kithen, apart from the finish of the cooking, the 2 judges are arranged so as to screen the situation of their cooking.
In order not to identify each contestant, all contestants wear their overalls without their names or affiliation on and they are called by their fixed numbers at random in the morning on the day.

Le TAITTINGER Culinaire International has a strict consideration not to influence each judge’s impression on their judgements and avoid the linkage of individuals’ names and their work on the entire process of screening, including the finished foods, screening of documents and the working stage for the practical cooking skills. 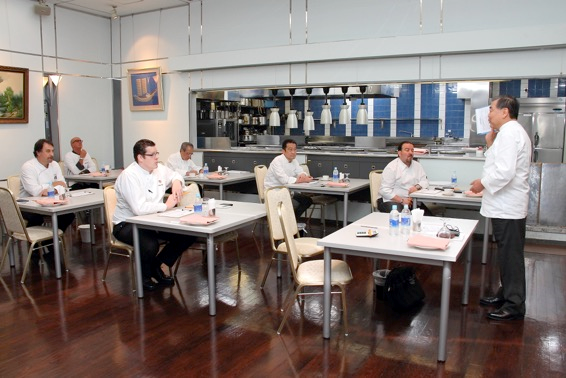 Now, this is the room for judges.
The 9 judges are professional active French cooking chefs whose skills have been approved both in and out of Japan.
Among them, some are previous winners in Le TAITTINGER Culinaire International.

The first food from the contestant is delivered. 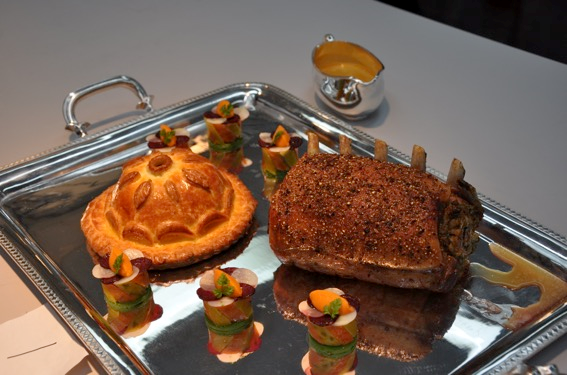 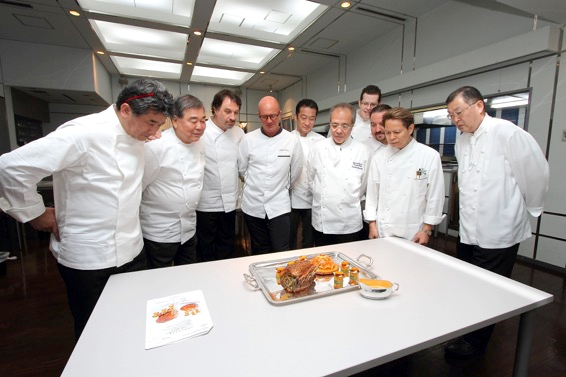 The judges immediately gather around the food.
They screen the food if it has been cooked as the submitted recipe had suggested by looking at the food as it has been arranged. 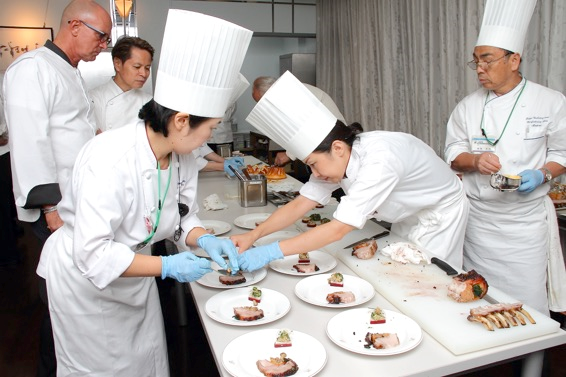 The food is immediately cut on the spot and divided.
The staff work speedily before it becomes cool and loses the flavour.
The judges’ eyes are focused on the state of the cutting in order to check the cross section. 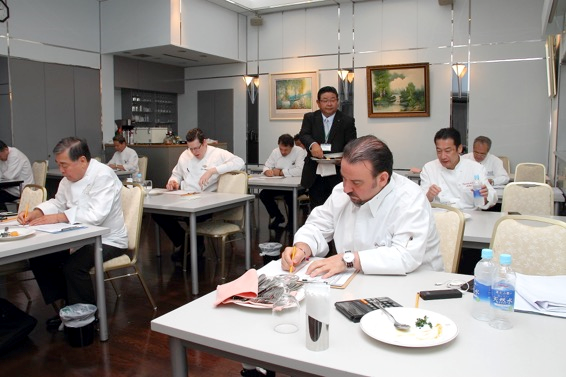 Returning to their own seats, the judges examine the food and start eating to record the judgement context.

In the judges’ room, the same process is repeated with each contestant’s food and the atmosphere is very tense.
The room is very quiet. The only sound is the one from the plates when they are delivered, also knives and folks.
The quietness raised the tension of the site even more.
The staff and the judges’ prompt movements and their serious looks showed their sincerity to judge it fairly while the contestant’s food is still fresh.
Just looking at them had a sobering effect on me. 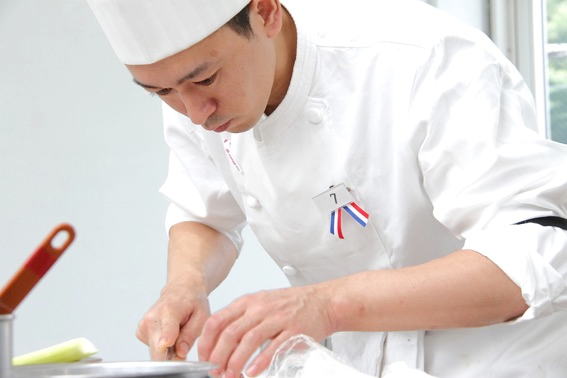 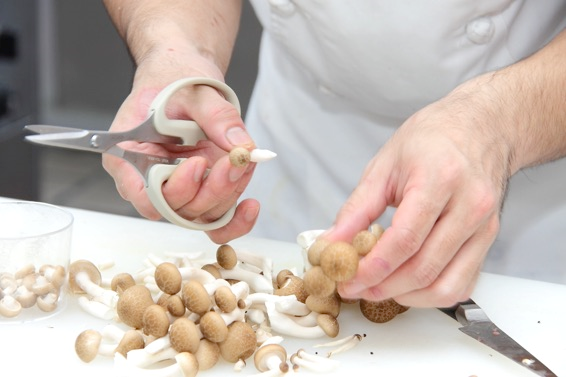 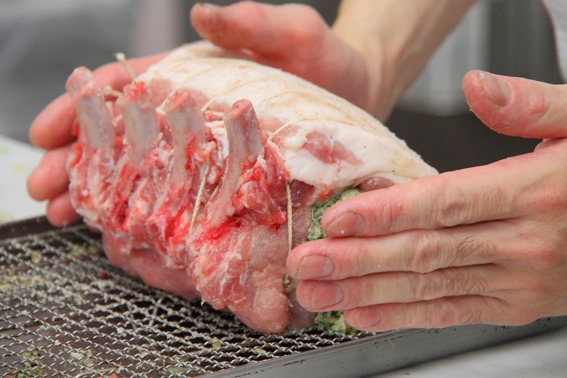 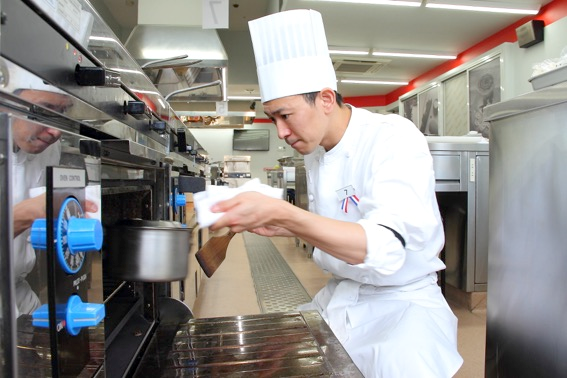 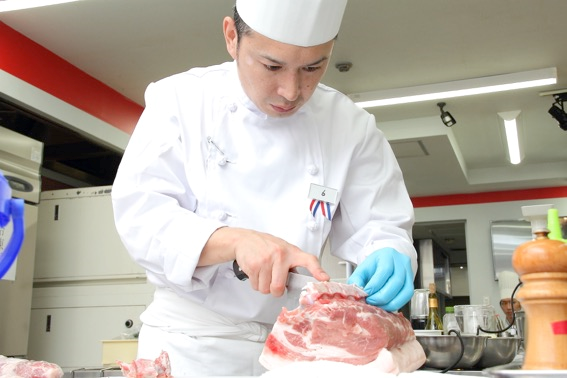 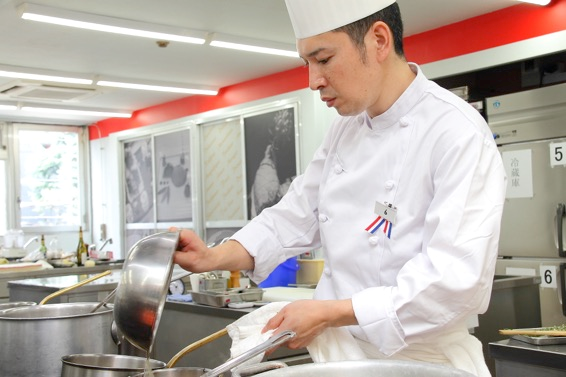 In the kitchen, the contestants are cooking with their serious look, being conscious about the time for the finish to a draw near, moment by moment.

At the contest this year, the most difficult point was the assigned cooking, 「Vileroy styled egg」. 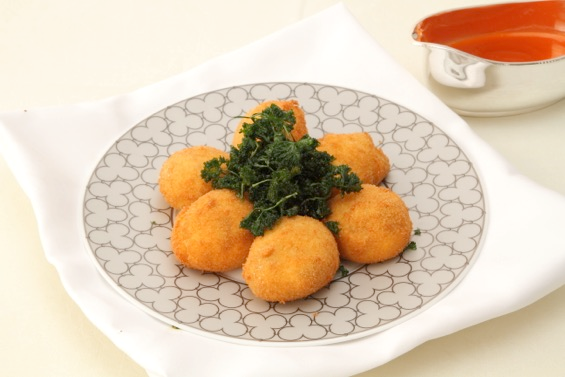 Unlike the main food, the assigned food’s contents are informed to the chefs 20 minutes before judging their practical skills and the contestants have to cook with the given ingredients within the limited time.
「Vieroy styled egg」is cooked as follows.
At first, make poached eggs in the boiled hot-water.
After draining the water off, cover them with the sauce prepared separately and cool them down. Then put batter around them and fry them. It is the food which requires several processes.

The work of piling up these processes is difficult, but on the top of that, the last part, the frying is the traditional skill of French cooking and has become a big area to challenge the contestants because nowadays it is hardly used in French cooking. 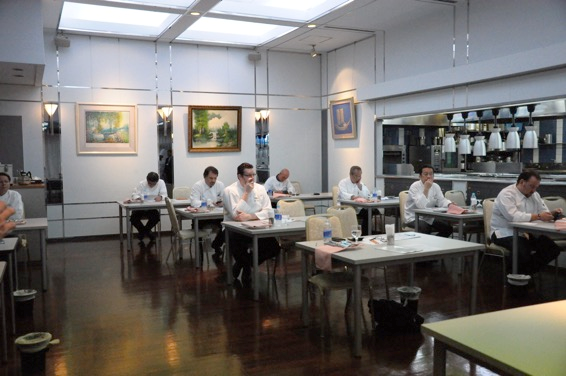 Among the contestants, some had a tough time in cooking this egg recipe until the time was up. As one couldn’t finish his food as it had been planned, the judges had to wait for him.
In the cooking of 「Vileroy styled egg」, they had to complete 6 eggs out of 10 to serve on the plates, but one contestant failed in all of them except 4 and another contestant went over the time limit.
The tension was never broken until the end and the screening of the foods from all 8 contestants would soon finish. 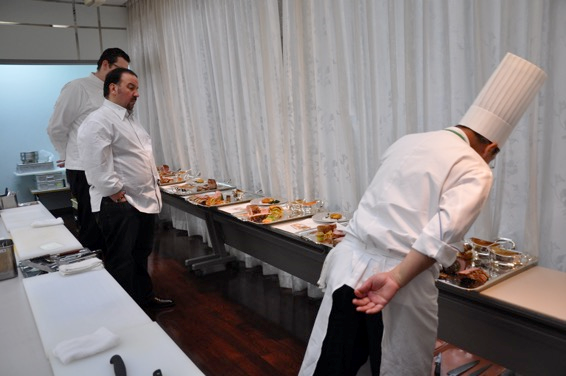 Some judges are checking the arranged foods again. 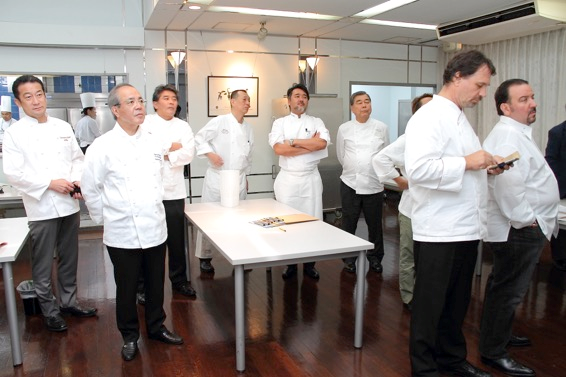 In the end, all the judges write their scores on the board and decide on a winner, adding up the scores.
How will the result be announced?
I’ll tell you about the presentation and the party in the last volume.