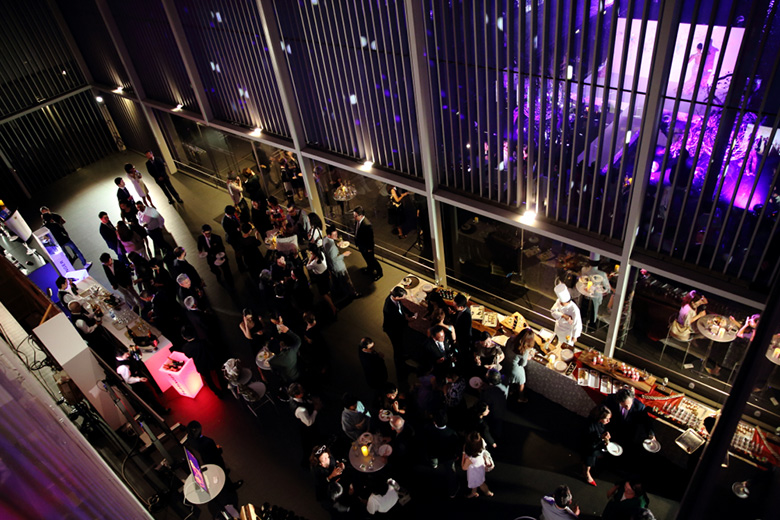 The champagne brand TAITTINGER which the Sapporo Beer carries Continuing from the 1st volume, I’ll tell you how the event went. 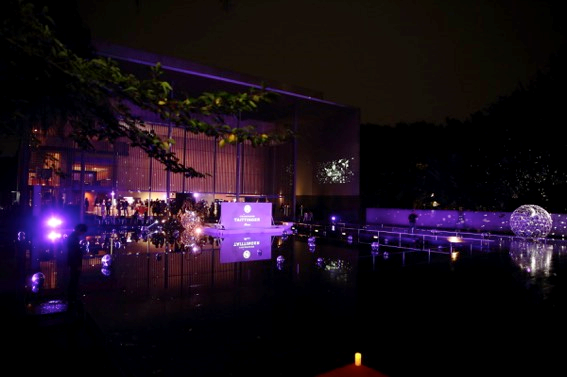 Many guests gathered at the venue, the treasure hall of the Horyu-ji temple. 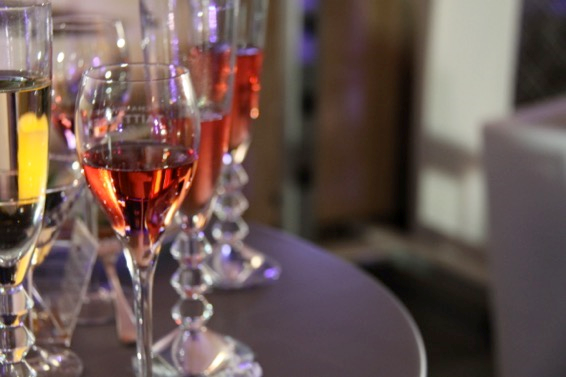 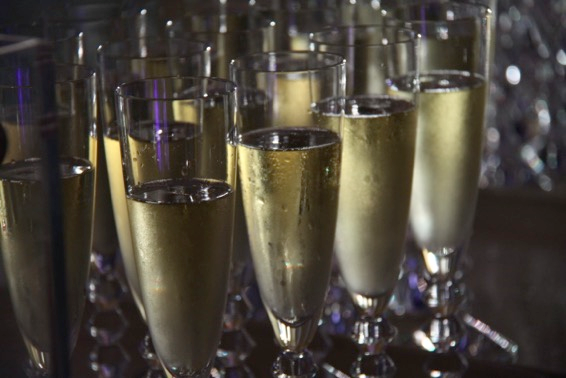 At the beginning of the event, the TAITTINGER owner, Mr. Pierre Emmanuelle Taittinger greeted and proposed a toast with Comtes de Champagne Blanc de Blancs which is proud of its many awards. 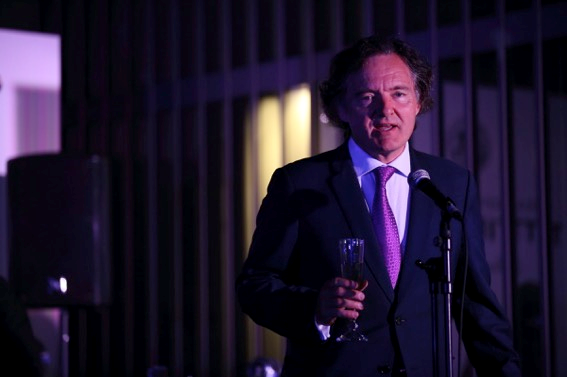 Mr. Pierre Emmanuelle Taittinger was looking forward very much to this event which is held in Japan, his second home. 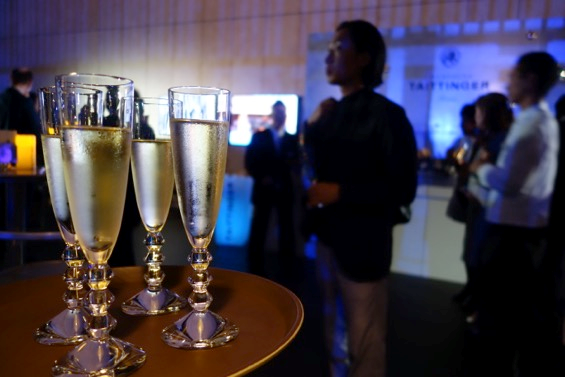 The glasses are 「Baccarat」which are from the glass-maker in France. 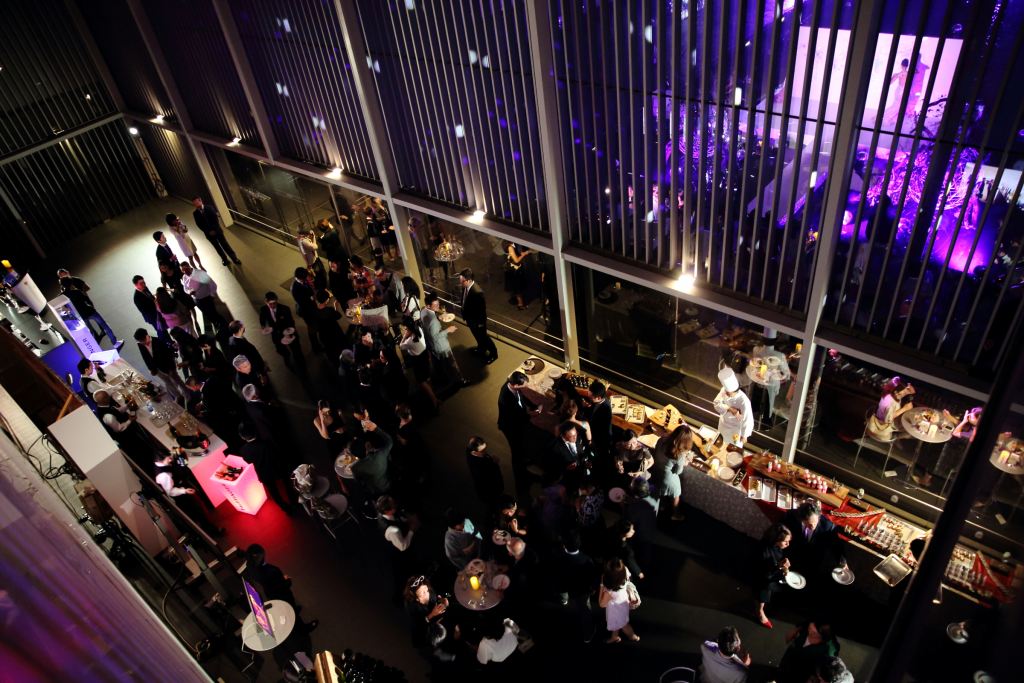 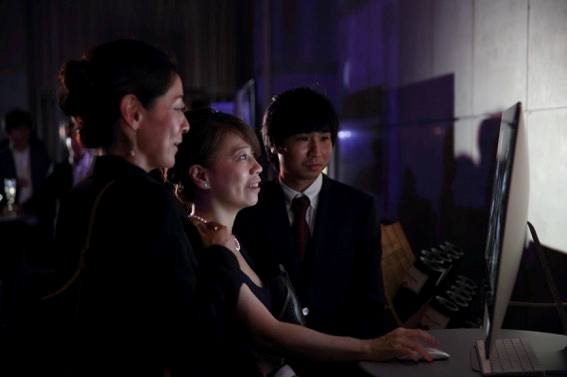 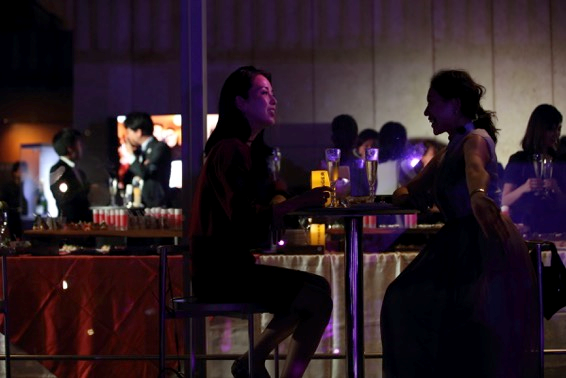 Everyone is enjoying the time with the TAITTINGER champagne. 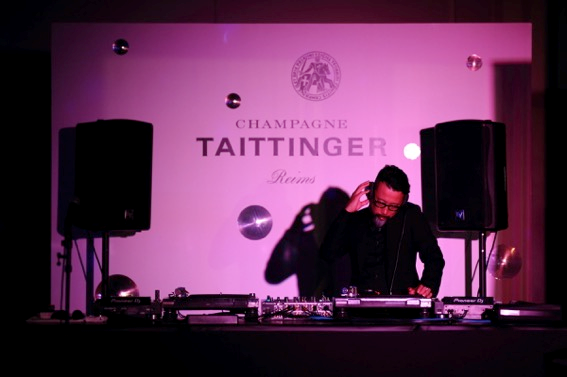 The DJ is Mr. Shuya Okino. He is the most famous JAZZ Crossover DJ as well as a producer. 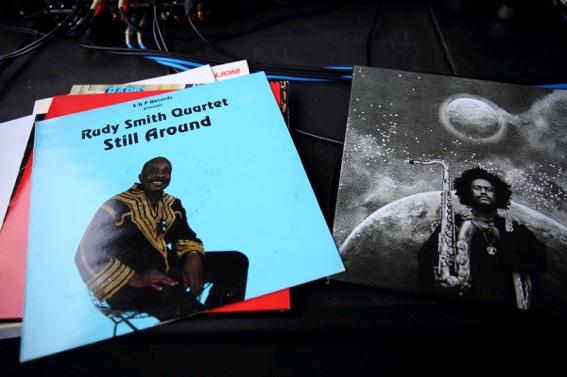 Mr. Okino gathered data at the TAITTINGER champagne maison in France and he bought a record there, being based on his inspiration from the site and then he created the music structure for this event.
He will express his TAITTINGER story and his passion in music. 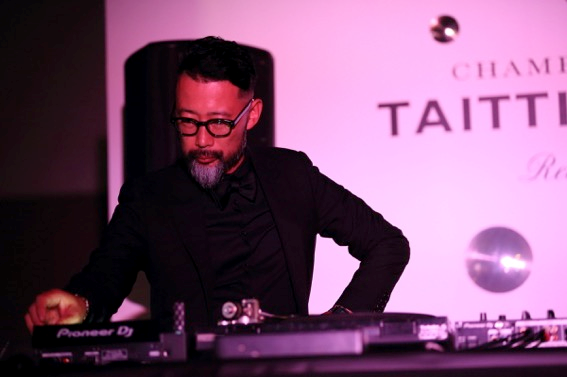 On the screen, the pictures taken at the site are shown with Mr. Okino’s music. 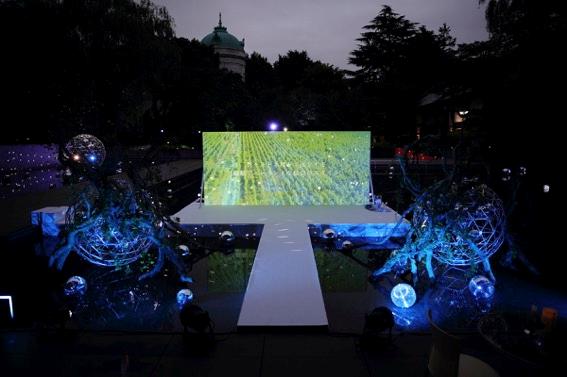 Then together with the music, Ms Saori Kanda’s live painting starts. 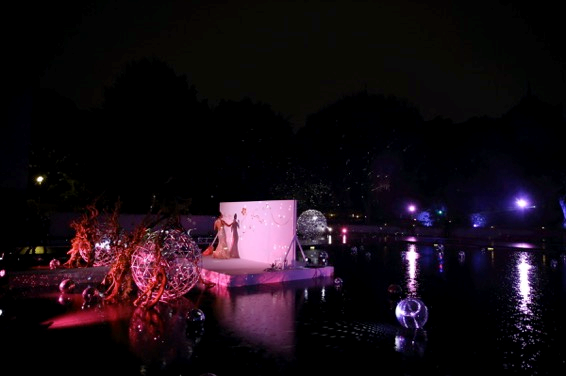 Ms Kanda is a 「painting artist」and she has been playing across the world, painting pictures on the huge canvas, dancing with music.
This time, she made a lot of sketches at the TAITTINGER champagne maison in France, visiting there with Mr. Okino and returned to Japan with the drawing of her visions which she had imagined at the site.
The theme of the picture which she is going to draw at the event is 「grapes」which are the ingredient of champagne.
At first, she slowly drew the twigs of grapes, just stroking the canvas with the brush. 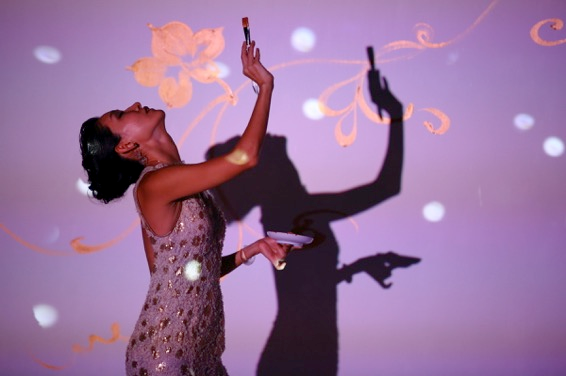 The sequence of Ms Kanda’s movement is very smooth and the guests were drawn by her dazzle.
Her expression using her whole body makes me feel the deep energy. 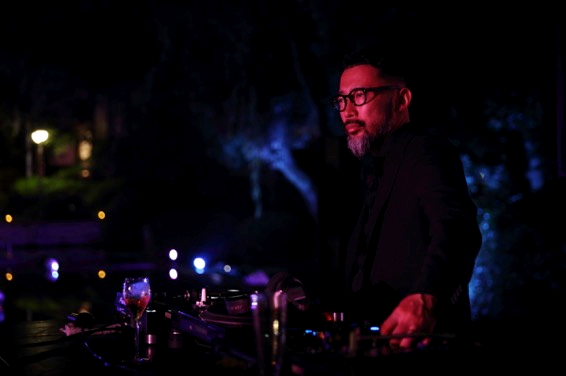 When the music changed, her mood of drawing the picture changed.
The vivid berries of the grapes in two colors were expressed boldly, using her palm instead of a brush. 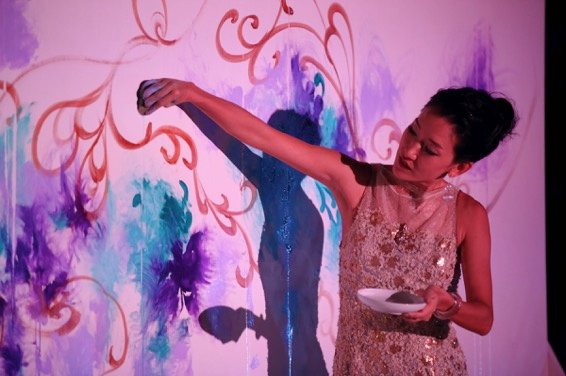 Ms Kanda’s flexible movement looked as if she was close to the twigs of the grapes. 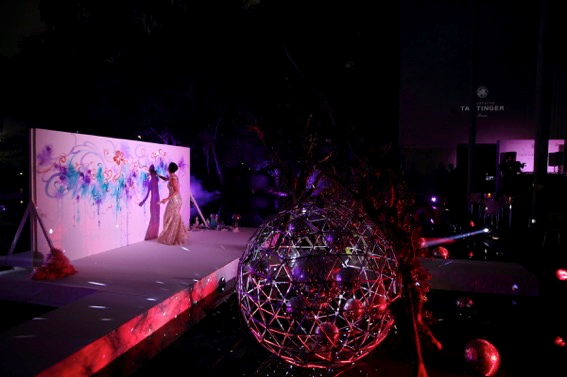 Mr. Okino’s music, Ms Kanda’s performance and the guests who are watching it, the entire venue seemed to spin one story and her work was approaching the finish. 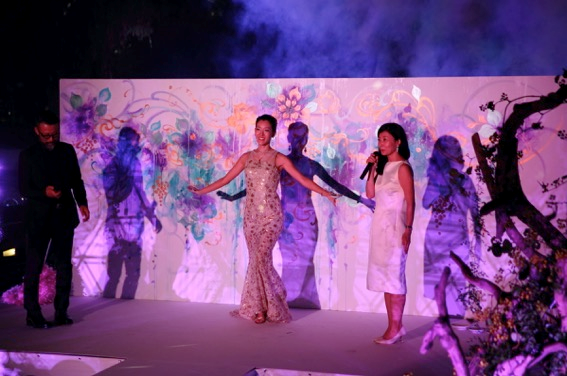 Together with the climax of the music, the tree of the grapes was completed. The ivy of the grapes looked shining strongly, getting the sunlight.

Ms Kanda said that champagne was not only for enjoying drinking, but also that the marriage of where and with whom you share the time and drink is important. 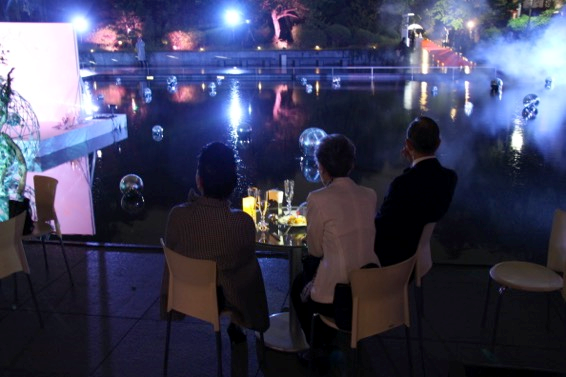 After this, the guests seemed to enjoy the TAITTINGER’s world outlook to the full.
When you have the chance of a toast, why don’t you enjoy TAITTINGER, feeling the champagne magic? 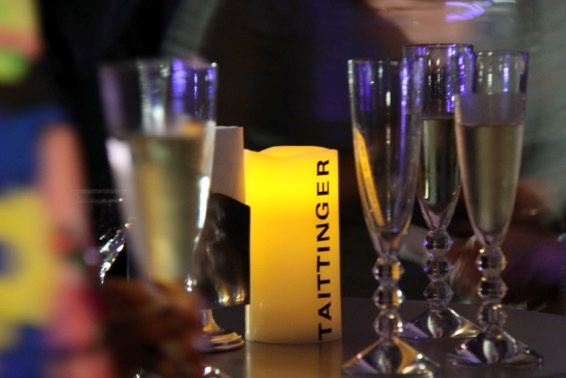 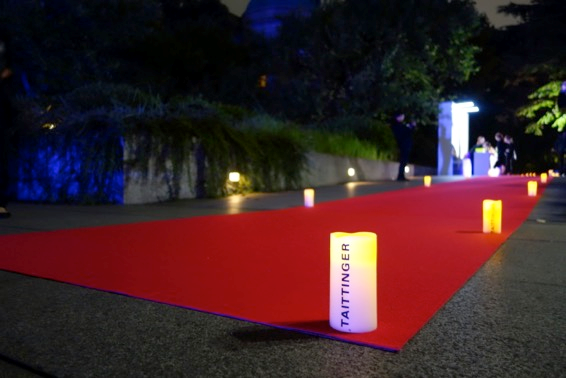